Having in its arsenal thousands of recipes, Ukrainian cuisine is fairly considered to be the richest one among the cuisines of Slavic people.

The prominent feature of the national Ukrainian cuisine is the combined method for heat treatment of meat and vegetables with or without the use of sunflower oil. After, so called “Ukrainian frying” – boiling, stewing, and baking happens. The critical factor in preparing traditional food is the place where it is cooked. In Ukraine such a traditional place was a hearth. Nowadays it is replaced with an electric or gas stove. This is the reason why the tradition of stewing, baking, and boiling has preserved.

Traditions – Back to the old days

Historically Ukrainians borrowed some culinary methods from their closest neighbors, partly modifying the recipes and adapting them to their tastes. Highly popular in Ukraine pickled cabbage and homemade sausage have Polish origin. The method of frying food in oil has Turkic roots. This method was changed into sautéing of vegetables for cooking a traditional borsch (beetroot soup) and other dishes. The idea of cooking holubtsi (cabbage rolls) and varenyky (dumplings) was adopted from Turkish people. The recipes for pies, curd patties, meat in breadcrumbs, etc. were brought from Austria-Hungary. The use of paprika has also come from Hungarians. The impact of Germany can be seen in the dish “sichenyky” (cutlets made out of chopped meat, veggies, eggs, mushrooms, and many other ingredients). As you see, the cuisine of Ukraine has a rich history which was formed under the influence of neighboring nations: Russian, Polish, Turkish, and many more. However, the modern Ukrainian cuisine resembles none of the above mentioned. It differs from all of them and is widely known in the world thanks to its picturesque identity.

In Ukraine the most preferred meat is pork, comparing with beef in Russia or mutton in Tatarstan. Since olden times oxen were work animals in Ukraine. Their meat was thought to be less tender and tasty compared to the meat of pigs. Plus, beef was considered to be less “clean” meat than pork. Among most popular meat dishes are homemade sausages. In times gone by Ukrainians preserved sausages in ceramic vessels filled with melted lard.

Potato, so much beloved by Ukrainians

The main agricultural plants in Ukraine are: potato, sugar beet, bulb onion, and cabbage. These vegetables are the most commonly used ingredients for salads and soups. Potato got widespread use in XVIII century. Though this vegetable did not become “the second bread” (as it did in Belarus), it made a conquest of Ukrainians. The potato is used to cook main dishes, second courses as well as side dishes to meat and fish. On top of that, potato is used to get starch necessary for cooking kissel and various sweet dishes. 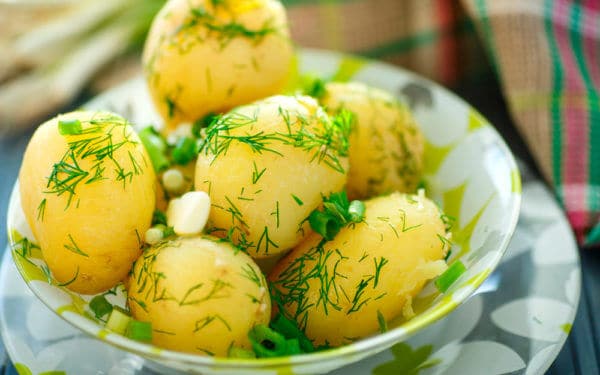 How Ukrainians spice their food

Have you liked the article about the national Ukrainian cuisine?