Why do Ukrainians honor bread so much? Discover the world of traditions

In Ukraine bread is the symbol of life. Since ancient times it was highly honored. Ukrainians call the bread “saint/holy”, “gift from above”, “father”, “breadwinner”, and “head.” In Ukraine none important event happens without bread.

Symbolizing life in rituals and traditions, bread has been used to bless newly married couples, congratulate with newborn, welcome guests, hold a housewarming party, or lay someone to rest. As you see, bread follows us since the beginning till the end of life.

The baking of homemade bread is one of the most important Ukrainian traditions that were inherited from mother to daughter. A special attention was given to neatness and carefulness of a person who cooks. The usual traditional bread was made using rye flour with the addition of barley flour, buckwheat, peas, corn, and crushed potato. In days gone by, the bread was baked only in a hearth. The process itself excluded the use of any kitchen equipment. This is why village bread is so tasty.

Each piece of bread was eaten completely, without leaving any pieces, to prevent loss of its power. Bread was not allowed to be thrown away as a garbage. All bread crumbs were given to birds or cattle. It was forbidden to say anything bad about bread - you can only say that it is unbaked, raw, slightly burnt, or stale.

Ukrainian ancestors even viewed the field, planted, and reaped the harvest with the bread on an embroidered towel close to them. The best reaper was adorned with the wreath of spikelets. The first wheat sheaf was very esteemed and regarded as a symbol of harvest and used to bake wedding korovai (round loaf bread).

On Makovii (Savior of the Honey Feast Day), there was a tradition to bless a new harvest. People put different field herbs in bags and went to the church to bless them. After, they added herbs to wheat grains in order to bless the next harvest for fertility.

On the Festival of the Savior people blessed pears, apples, honey, and kalach (ring-shaped bread) cooked using wheat from a new harvest.

In Ukraine bread with salt on an embroidered towel is the highest sign of hospitality. Korovai (round loaf bread) covered with a towel was always lying on a table under icons.

If you welcome people with bread-and-salt, this means you respect them for what they are. 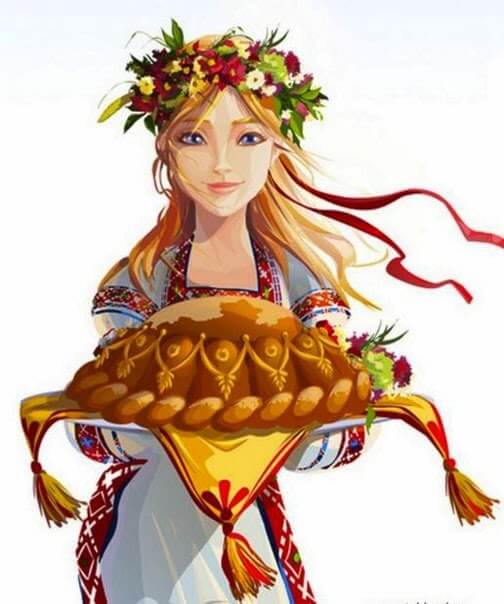 Bread and salt are eternal. Bread remains bread in heat, cold, and even over years, when it becomes dry, bread still remains to be bread. And salt doesn’t lose itself, even when dissolved in water, it doesn’t disappear – it simply makes the water salty.

Eternal and pure, bread and salt are the carriers of lasting and cherished memory. Bread is the holy base, while salt – the light part of everything. If you take in hands bread with salt, you get in touch with something holy and sacred, something that has evolved for centuries and is still present in the lives of Ukrainians.

Have you liked the article about Ukrainian bread?