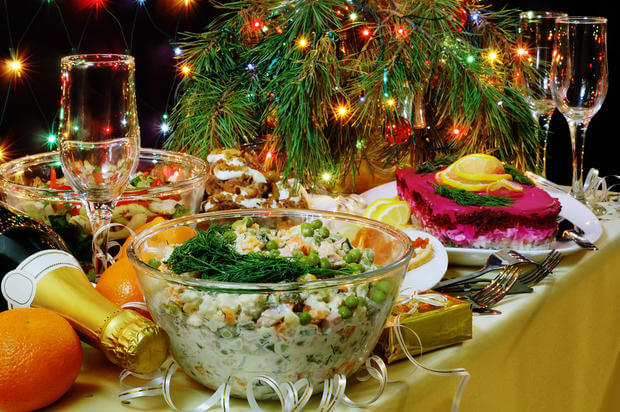 On the threshold of the New Year each goodwife is searching for new dishes to gladden and surprise family and friends.

Today we are going to look back at the past and discuss how Ukrainians celebrated the New Year and what festive dishes they served and cooked over the last one hundred years.

Some Ukrainian culinary attributes still remain unaltered. They have accompanied Ukrainians from XX to XXI century and are present on modern New Year tables.

The beginning of the XX century

During the Civil war in Ukraine and in Bolshevik times a New Year table was a luxury for Ukrainians. Those, who could afford themselves to celebrate, had the Cesarea pig in the centerpiece of their table. The pig was called in such a way because the first of January was the day of St. Basil the Great, archbishop of Cesarea, pig defender. At that time it was commonly believed that pigs live with delight and are happy to appear on the New Year table. The pig was roasted with onion or boiled with mush. 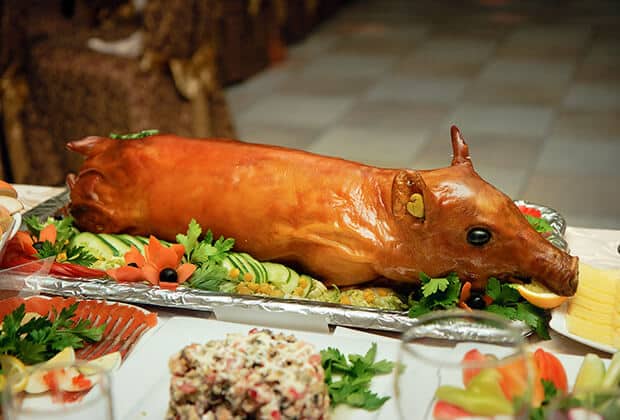 Along with that, Ukrainians cooked other pork dishes – sausages and pork knuckles. One more attribute of the 1900 year was a tangerine. Ukrainians have enjoyed eating citrus fruits already at that time. However, this fruit was rather expensive. Tangerines were imported from Spain and transportation cost dearly. These fruits were also used as a decoration on a New Year’s tree together with nuts.

In the period since the beginning of the century till 1935 the New Year was officially forbidden. The Soviet government considered that this holiday was bourgeois. That’s why all celebrations were held secretly. If there was a New Year’s tree in the house, the windows were closed in order to hide the tree.

Dishes became simpler comparing to the beginning of the century. Ukrainians mostly served pickled products and meat/fish in aspic. 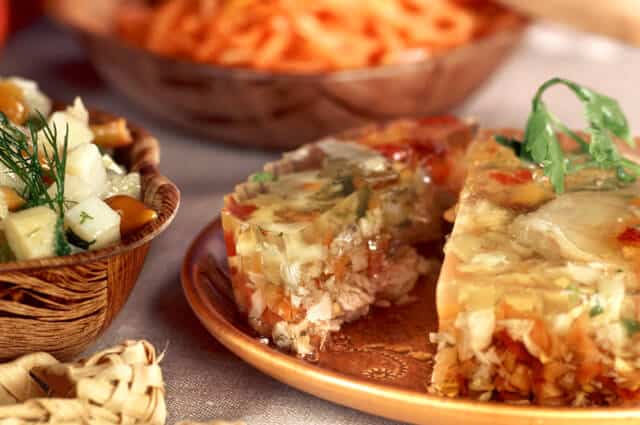 The famous salad “Oliv’ie” was also served. However, it changed significantly during the last several decades and contained less ingredients. Before the revolution the salad even included caviar, hazel grouse, and lobster. In 1940 the salad became cheaper, though it was still considered to be elite.

Almost all dishes from the forties “migrated” to this sixties. Also, such typical dishes as shuba (herring under fur coat), kholodets, and sprats began to appear. However, they became a constant attribute a bit later. The New Year was mainly collective and corporate. At home feasts were rarely held. Most Ukrainians celebrated in restaurants. 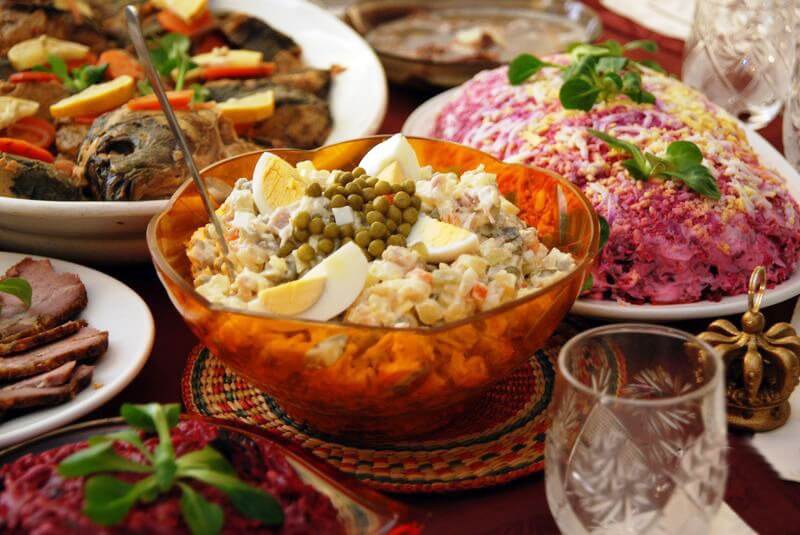 In the eighties everything changed. Feasts became a tradition and Ukrainians had rich feasts. Despite there were food shortages, festive tables were loaded with products. Ukrainians prepared for the New Year a few months prior, little by little buying the products that were in short supply.

The salad “Oliv’ie” which “moved” with Ukrainians from one decade to another became a little richer. Ukrainians began to add canned green peas, sausage, and mayonnaise. 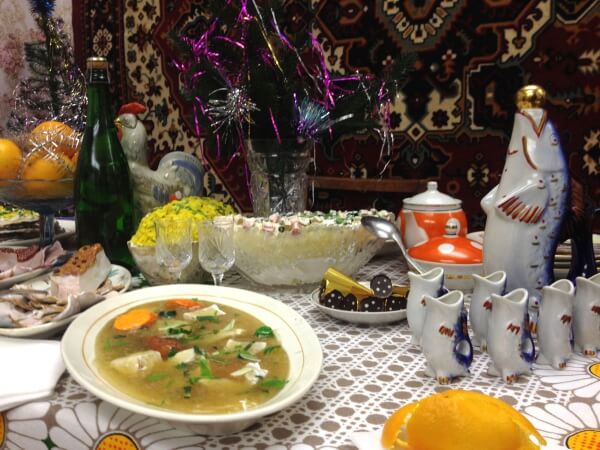 In fact, exactly in the eighties the New Year stopped to be ideological and became a family celebration.

Opening of the “Iron Curtain” has led to a great interest to everything foreign and appearance of international products on the Ukrainian market. 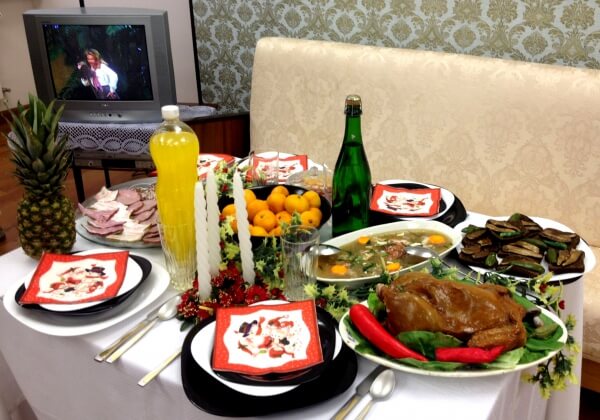 Various instant drinks, candies and chocolate, cheese in the form of triangles, grilled chicken, liqueurs – all this appeared on the New Year table.

Some Ukrainians started to celebrate the New Year in night clubs, and those who welcomed the New Year at home watched TVs. 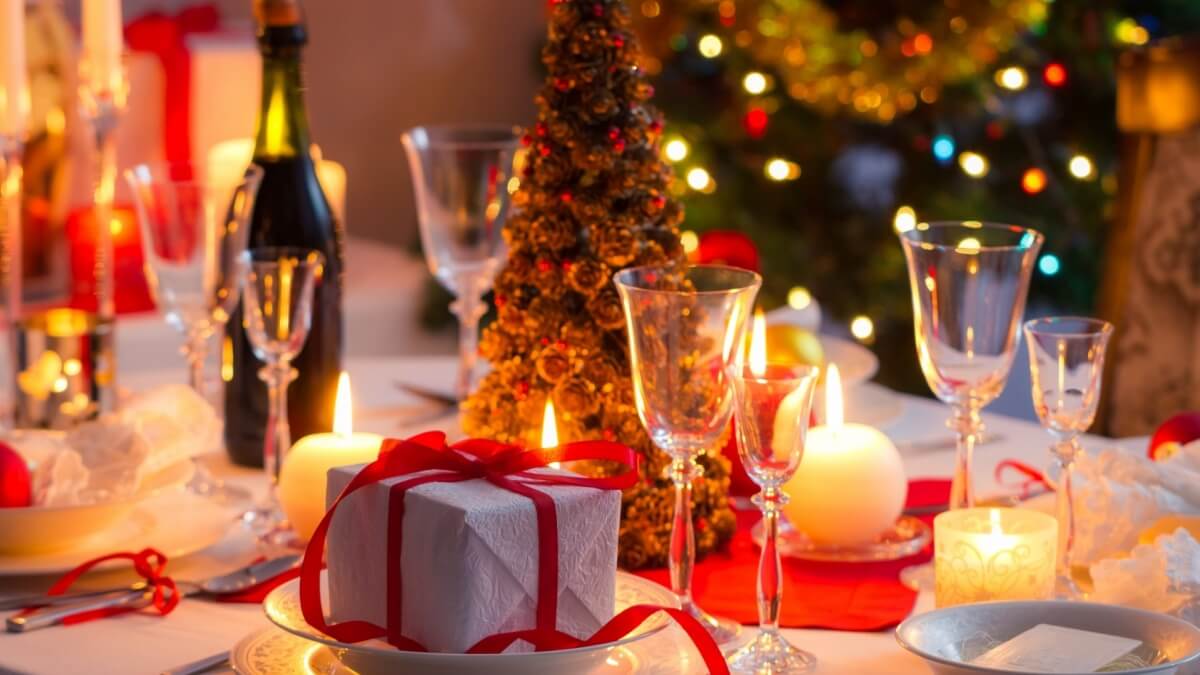 Have you liked the article about New Year dishes in Ukraine?