15 Remarkable Ukrainian women who left their mark on history

Ukrainian women are not only beautiful – they are wise, strong-willed, talented, and intelligent! All of them deserve respect and admiration.

On the occasion of the Women's Day, let’s remember these distinguished women - the women who made a significant contribution to the culture, art, education, sports, science, literature, and many other spheres of life in Ukraine and abroad. 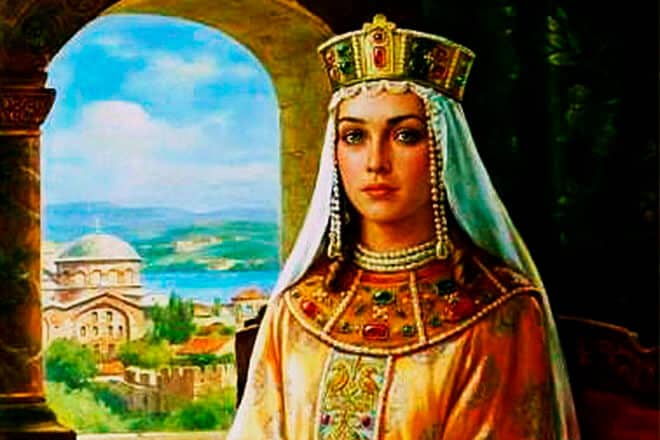 Princess Olha was the wife of Igor, the first ruler o Kievan Rus'. After the death of her husband, Olha was the regent of Kievan Rus, one of the most powerful powers of that time, for 17 whole years. According to historical data, the princess was a strict, forceful, charismatic, and wise ruler.

She regulated the process of the tribute collection and put efforts to spread Christianity through the Kievan Rus'. Even though it would be her grandson Vladimir who would convert the entire nation to Christianity in 988, Olga’s endeavors earned her veneration as a saint.

She was the second wife of the French King Henry I Kapet, mother of the future King Philip I and great-grandmother of almost 30 French kings! During the church wedding, Anna presented her husband the Gospel, written in Cyrillic, which she brought from Kyiv. All later kings of France, until the 1973 revolution, swore allegiance to this holy book.

Roksolana (Anastasiia Lisovska) is another great Ukrainian woman who was at the head of the great empire and was one of the most influential figures in the Muslim world in the XIV century. Historical sources prove that she was not only a beautiful woman but also a very clever ruler and talented diplomat and politician.

Once ended up in the harem of Sultan Suleyman I Magnificent, she began to teach Turkish and read the Koran. During 200 years of existence of the Ottoman Empire, a concubine became the wife of the sultan for the first time. An ordinary Ukrainian woman became a serious political player in Turkey. She took ambassadors; and Sultan Suleyman consulted with her on important state affairs.

Maryna Mazepa was the Mother Superior of the Kyiv-Pechersk Voznesenskyi and Hlukhivskyi nunnery. Maryna was the mother of Hetman of Ukraine I. Mazepa and the grandmother of well-known figures of the Hetmanate - Andrii Voinarovskyi who was involved in the drafting of the Constitution of Pylyp Orlyk of 1710) and Ivan Obydovskyi. T

This amazing woman also introduced and implemented sewing of church clothes and icons with gold and silver threads. Part of her artistic heritage was preserved in the vestry of the central cathedral of the Uspenska lavra. 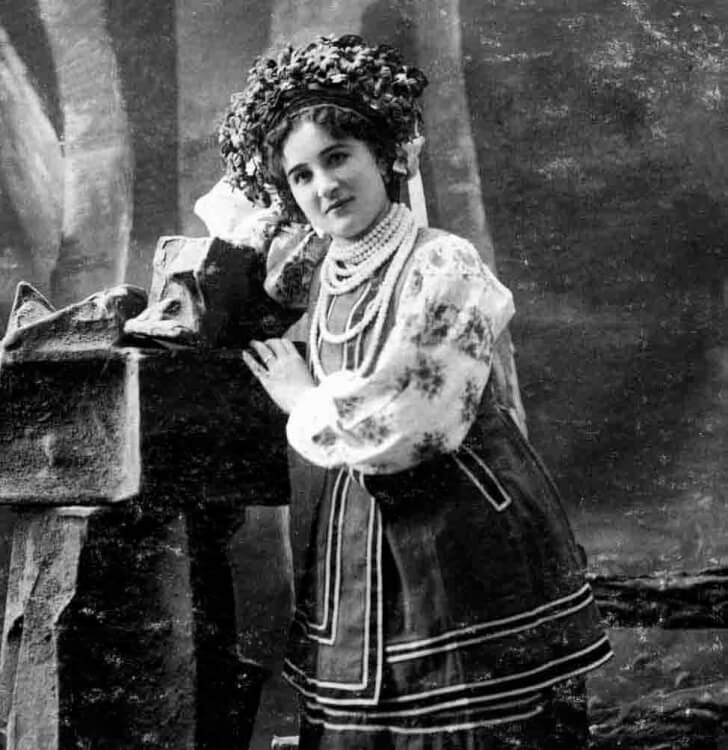 Mariia Zankovetska was an actress and theater figure, a leading star of the Ukrainian theater of the late ХІХ and early ХХ centuries. She entered the history of the theater as an outstanding Ukrainian tragedy actress who embodied the symbol of a Ukrainian woman in her scenic images.

The professional career of Zankovetska comprised of over 30 roles. She created images that were penetrated with a real drama and a fiery comedy. Maria glorified with her play ordinary common people revealing the immensity of their souls. Maria also sang in a mezzo-soprano voice. 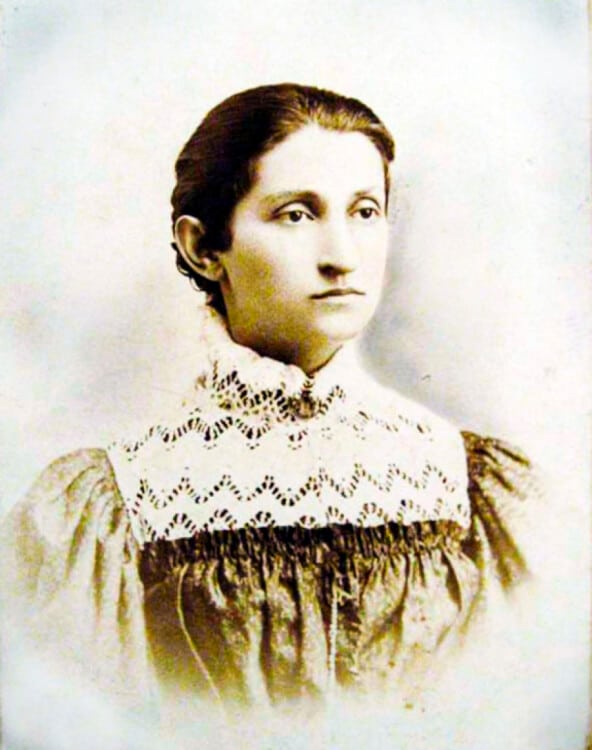 Olha Kobylianska was a writer and one of the first feminists of Ukraine. She always dreamed about high education but at that time it was impossible for women. So Olha began to study independently: she borrowed books from her brothers, listened to their conversations and participated in discussions.

In time Olha began to be interested in women's rights and problems of emancipation. Later Olha Kobylianska began to be more actively involved in the feminist movement in Bukovyna, in particular, joining the Society of Russian Women in Bukovyna.

Later, she founded another female association called "Circle of Ukrainian Girls." Members of these movements raised the issue of the difficult situation of women of the middle class and advocated for gender equality. Olha Kobylianska embodied her feminist ideas in her works. Many of her main heroines are the characters of an educated young girl ("Man", "Princess", "Waltz Melancholy", etc.). 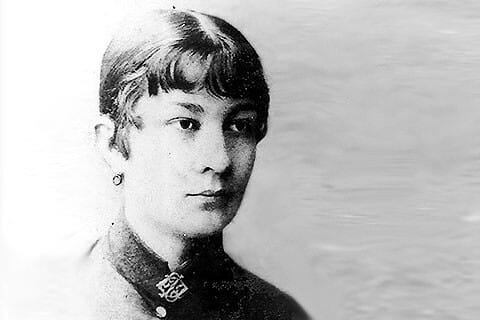 Sofiia Okunevska is an amazing Ukrainian woman who became the first female doctor in the Austro-Hungarian Empire. She acquired an education in Switzerland. After returning from studies, she could not receive practice, because in Lviv and in Cracow her diploma was refused to be recognized. She found work only in Karlovy Vary in the Czech Republic where she opened a private practice together with her husband.

Yet afterward Krakow University recognized her diploma, and Okunevska returned to Lviv. Sofiia was the first who used radiotherapy in the fight against cancer in Lviv. She also created the school of obstetrician-gynecologists and opened courses for sisters of charity that were first such courses in Western Ukraine. The patients called Okunevska "holy Sophia" for her empathy to other people’s pain. 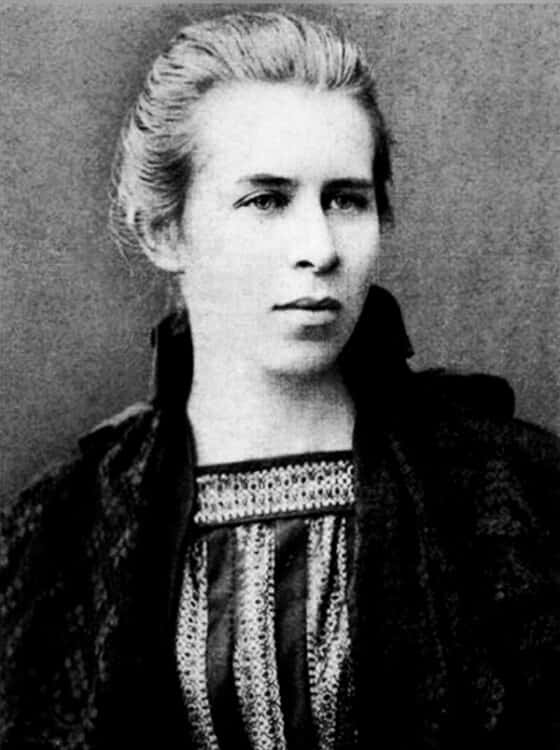 Lesia Ukrainka was a prominent Ukrainian writer, poet, translator, and cultural figure. Many of her works are recognized as masterpieces of world literature. She wrote her first verse in nine years, and the last one in 40 years. In total, Lesia Ukrainka wrote about 270 verses, and also poems and poetic drama works. The real name of this poet is Larysa Kosach. She also was an active political, civil, and feministic activist. 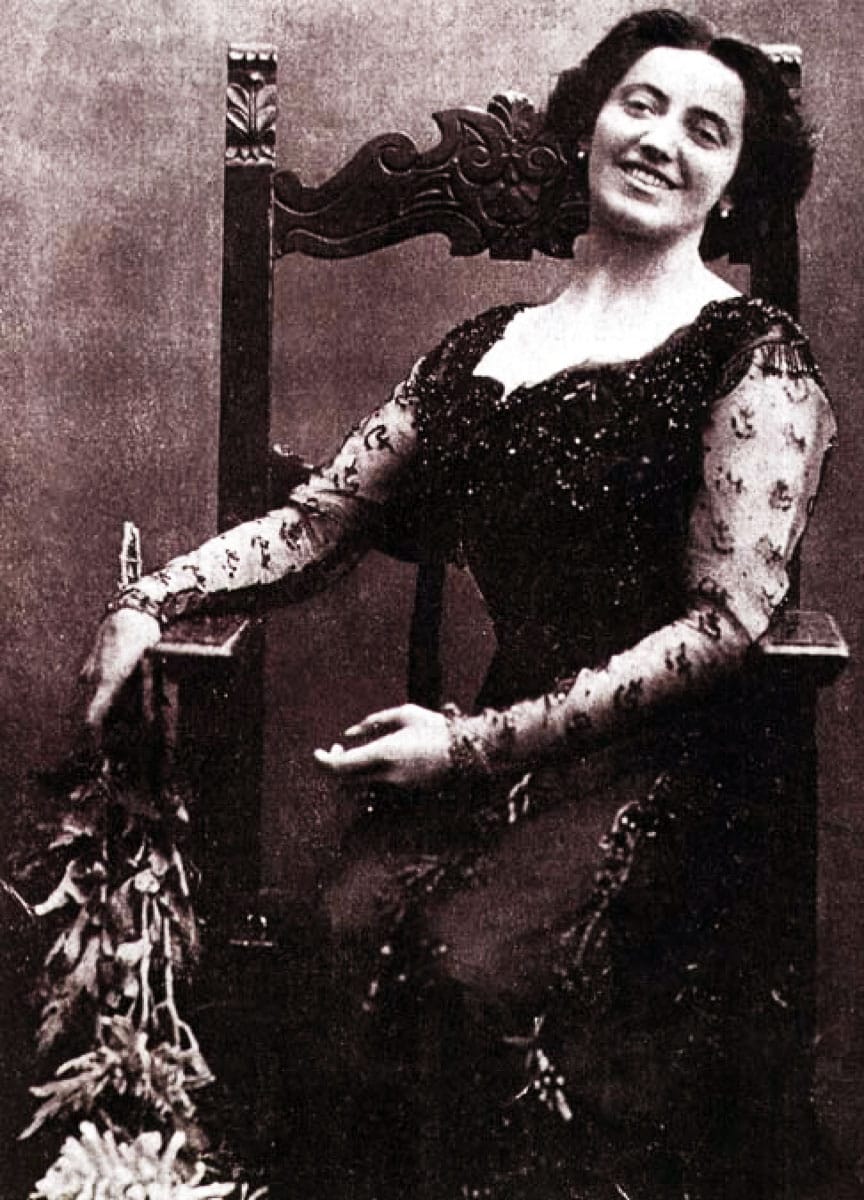 Solomiia Krushelnytska is the legend of the opera scene, Wagner-primadonna of the ХХ century. She triumphantly performed on the stages of Odessa, Lviv, Cremona, Buenos Aires, Warsaw, St. Petersburg, Paris, Naples, Rome, Genoa, Milan, and others.

In 1904, at the invitation of Puccini, she performed the opera “Madama Butterfly” at “Grande” theater in Northern Italy. After her brilliant performance, this opera gained worldwide recognition. Enrico Caruso, Titta Ruffo, and Fyodor Chaliapin considered singing with Solomiia on the same stage an honor. 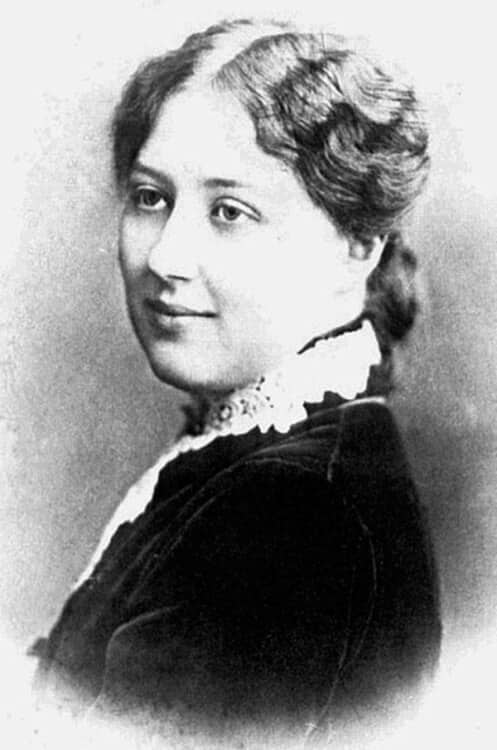 Nataliia Polonska-Vasylenko was one of the leading representatives of the state school in the Ukrainian historiography, the author of almost 200 scientific works. She specialized in Ukrainian archeology, the history of Kievan Rus’, the later history of the Zaporozhian Cossacks, and the history of her own times. 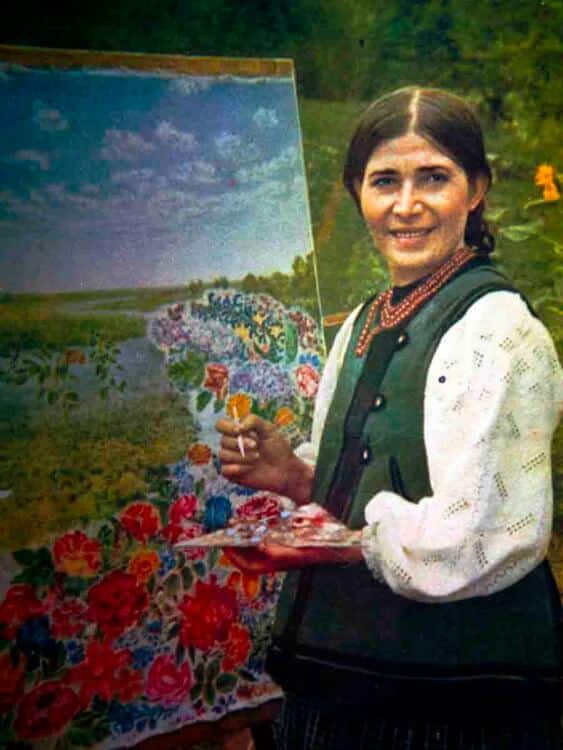 Kateryna Bilokur was a Ukrainian artist, a master of folk decorative painting, a representative of "naive art." This talented Ukrainian woman transmitted the unusual beauty and a variety of colors of her native land to the canvas thanks to the fantastic power of her imagination.

Once, on an exhibition in Paris, the world-famous artist Pablo Picasso saw the canvases of Kateryna Bilokur and was very impressed by her talent. "If there was such a woman in France, we would have forced the whole world to talk about her," - the artist said enthusiastically. 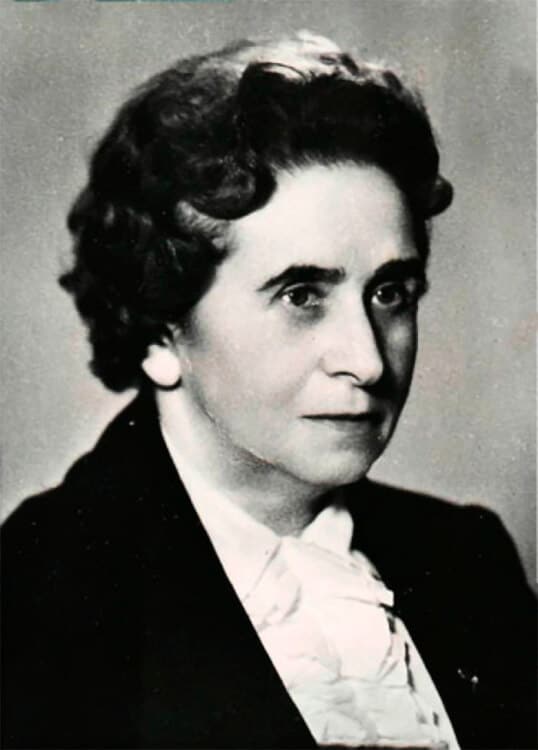 Olena Kazymyrchak-Polonska was a Ukrainian scientist, astronomer. She studied at Lviv University. Afterwards, she moved to Warsaw where she studied the movement of comets, in particular, the evolution of their orbits. She received many honors and awards for this, including the highest astronomical award - the Bredikhin Prize.

In 1978, the small planet number 2006 was named after Kazymyrchak-Polonska – “2006 Polonskaya.” In 1941, during the occupation of Lviv, Olena, risking her own life, rescued Polish officers. She made them a certificate of the trainees of the Lviv Observatory so they could leave the city. Being a scientist, Olena believed in God all her life and at the age of 85, she became a nun. But even then she did not leave science and continued to teach till the end of her life. 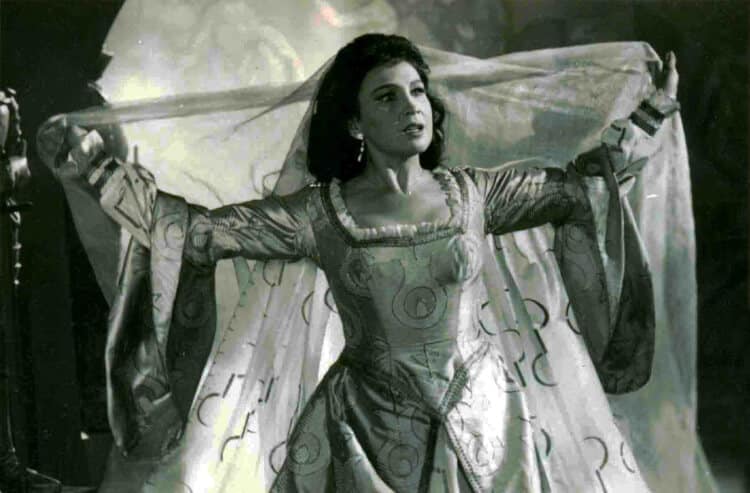 Yevheniia Miroshnychenko is a famous Ukrainian opera singer, teacher, and professor. This talented Ukrainian women with lyrical-coloratura soprano was a soloist of the Kiev Opera and Ballet Theater, performed at many world scenes.

Evheniia Semenivna has won worldwide recognition for her life and received many awards, including the title of Hero of Ukraine, the Order of the Order of Yaroslav the Wise, the Order "For the Development of Ukraine", the Order of Glory "For Faithfulness to the Fatherland," and many more.

Lina Kostenko is a modern Ukrainian poet and writer, recipient of the Shevchenko Award. It is her last name that is most often mentioned during the search on the Internet among Ukrainian poets and writers.

She is an Honored Professor of Kyiv Mohyla Academy, Honorary Doctor of Lviv and Chernivtsi Universities. In the modern Ukrainian tradition, she is among the most famous women of ancient and modern Ukraine. Among her most popular works are: Rays of the Earth, Wandering of the Heart, On the Shore of the Eternal River, and more.

Of course, the women we’ve remembered today are by far not all outstanding and talented Ukrainian women, in the following articles we’re going to acquaint you with more outstanding personalities.

Have you liked the article about 15 outstanding Ukrainian women who stunned the world?