For the fourth consecutive year, the Royal Canadian Mint releases coin "Traditional Ukrainian Pysanka" in the form of the Ukrainian Easter Egg for numismatists. And this is the only mint in the world, which pays much attention to the Ukrainian thematic in the coinage. What other mint presents silver and gold-plated coins in the form of Ukrainian pysanka?

The Royal Canadian Mint presented the fourth "Pysanka" coin with a face value of 20 Canadian dollars. The fourth coin from the series "Traditional Ukrainian Pysanka" is a simple and well-respected version of the world-famous Ukrainian Vegreville Pysanka.

The Vegreville Pysanka coin gravitation imitates the tiled view of the geometric design of the true Vegreville Pysanka, which includes five key elements: the radiating sun, symbolizing growth, state, and eternal life; triangles that signify Trinity and unity; a straight line that stands for the presentation of Eternity; a hexagon star that is a representation of windmills, a symbol of good harvest; and, finally, a wolf's tooth copy standing for security, as a tribute to the Royal Canadian Police.

Colors are also symbolic, with gold and silver representing wealth, and bronze meaning the land that supported the early Ukrainian population of Vegreville and their descendants. A portrait of Her Majesty Queen Elizabeth II is traditionally depicted on the coin reverse. 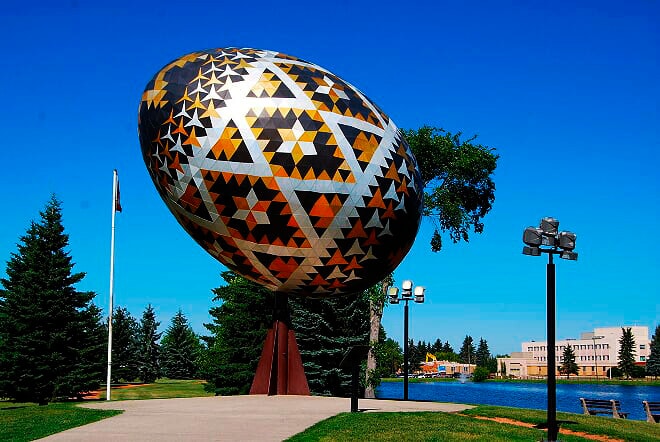 Vegreville pysanka is a sculpture of the Ukrainian Easter egg, located in the Canadian town  Vegreville. The monument was opened in 1975 by the Chamber of Commerce in honor of the centenary of the Canadian Royal Equestrian Police.

All last year's "Pysanky" coins were instantly sold to collectors because of small mintage and a small price.  All coins have a nominal value of 20 Canadian dollars, 5000 copies of each of the coins in the series each year, 99.99% silver, 1 ounce. The designer of the reverse of the coins is Canadian artist Anna Morash.

Have you liked the article about the Ukrainian egg coin?