Taras Shevchenko: facts about the genius that most people don’t know

Taras Shevchenko is a prominent Ukrainian poet, writer (playwriter and novelist), artist (painter and engraver), public and political figure, folklorist and ethnographer. He wrote poetry and prose, created paintings and loved Ukraine. One of the most famous Shevchenko’s books is Kobzar. After publishing this legendary book, the writer himself was nicknamed Kobzar.

Even many years after his death, Shevchenko’s diverse oeuvre still arouses the interest. Today we want to share with you interesting facts about his life.

The record number of monuments

Shevchenko is on Mercury

In 1973-1975, the Mariner-10 automatic station flew three times near Mercury made the photos of this planet from a close distance and for the first time. It was discovered that the surface of the planet is covered with craters of various sizes. According to the rules of the International Astronomical Union, they were named after artists, musicians, writers, and poets. Thus, one of 300 Mercury craters received the name of Taras Hryhorovych Shevchenko. The diameter of the Shevchenko’s crater is 137 kilometers.

The basic education Taras had was two years of study at the church parish school. The future pride of the Ukrainian culture - Shevchenko - was obliged by many of his knowledge to baroness Sofiia Hryhorivna Enhelhardt. The young lady with charming beauty taught the young Cossack  Polish and French. His general understanding of the world was formed based on lackeys’ thoughts.

The works of Shevchenko are translated into Esperanto 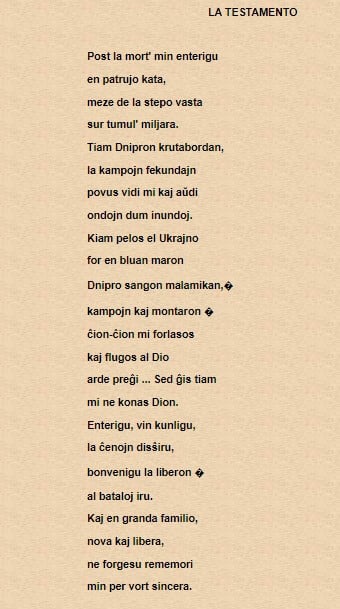 The poetry of Taras Shevchenko has been translated into more than one hundred languages. Among them are Japanese, Korean, Arabic, and international Esperanto languages. The vast majority of translations was made in Russian, German, Polish, and English.

Shevchenko was a fashionist

Shevchenko was often depicted as a mustached man in a cap and kaftan. The researchers of the Kobzar’s biography do not agree with such one-sided interpretation of his personality. Shevchenko was a Democrat in his heart, and he did not like excessive grandeur.

However, during his life in St. Petersburg, when he became a fashionable portraitist and began to make good money, Shevchenko dressed very fashionably. In particular, in his diary, he wrote about the special pleasure of buying a rubber macintosh, which cost 100 rubles at that time. (For comparison – when Shevchenko worked in an archaeological commission he earned 150 rubles a year). 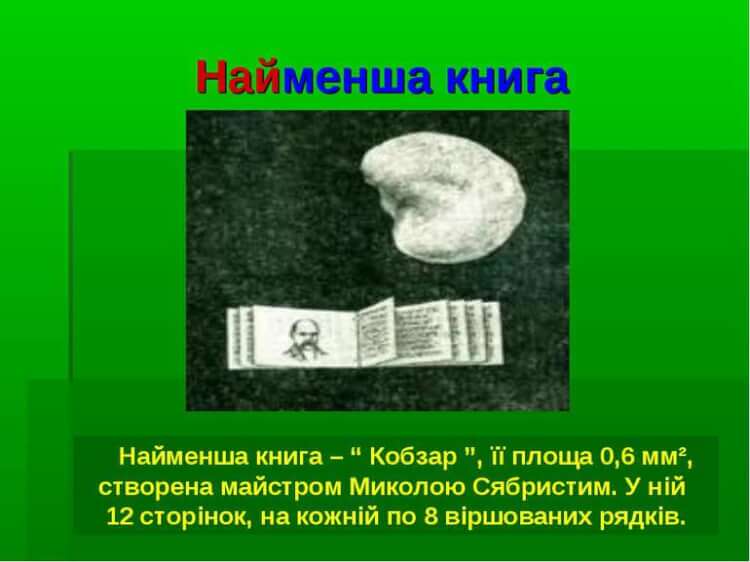 The Ukrainian master Mykola Siadrystyi created the smallest "Kobzar" in the world. The book measures just over half a square millimeter. It is almost 19 times less than the smallest Japanese book. The pages are so thin that they can only be turned over with the tip of the sharpened hair. The book is seamed using a spider’s web, and the cover is made using an everlasting flower. The book contains 12 pages, each with 8 verse lines.

On the photo: miniature book, nearby a poppy grain, is located (for comparison). The image is increased by 700 times. The book’s size is 0.6 mm2 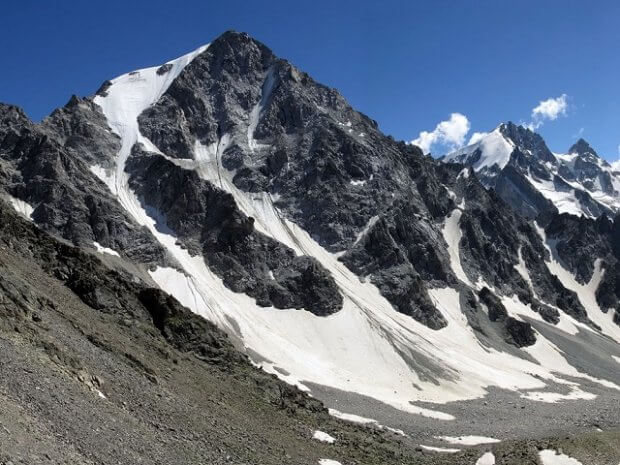 In addition, the sea bay in the Aral Sea and the 4,200-meter mountain peak on the northern slope of the Greater Caucasus, are named in honor of Shevchenko. This name was given by Ukrainian climbers who first make their way to the top of this Caucasus mountain in 1939.

Taras Shevchenko's paintings are less known but also a popular part of his heritage like engravings and prose works. Up to the present time 835 paintings by Shevchenko have appeared in the originals and partly in wood and metal engravings. They are made with oil, ink, watercolor, lead pencil, etc. However, only a small part of the works of art has the author's signatures, and the creation date is even smaller.

The largest portrait of Taras Shevchenko with an area of ​​over 500 square meters was painted in Kharkiv in October 2014 on the wall of a 17-story building. This graffiti was added to the Book of Records of Ukraine.

The picture was painted at night for more than two weeks. Artists needed about 900 cans of aerosol paint to put the idea into reality. The creative group Kailas-V used as a basis the portraiture of Taras Shevchenko made by Ivan Kramskyi. The width of the finished graffiti is 12 meters and the height is 43 meters.

Have you liked the article about Kobzar Shevchenko?