Encrypted embroidery. How to depict words and numbers in ornaments? 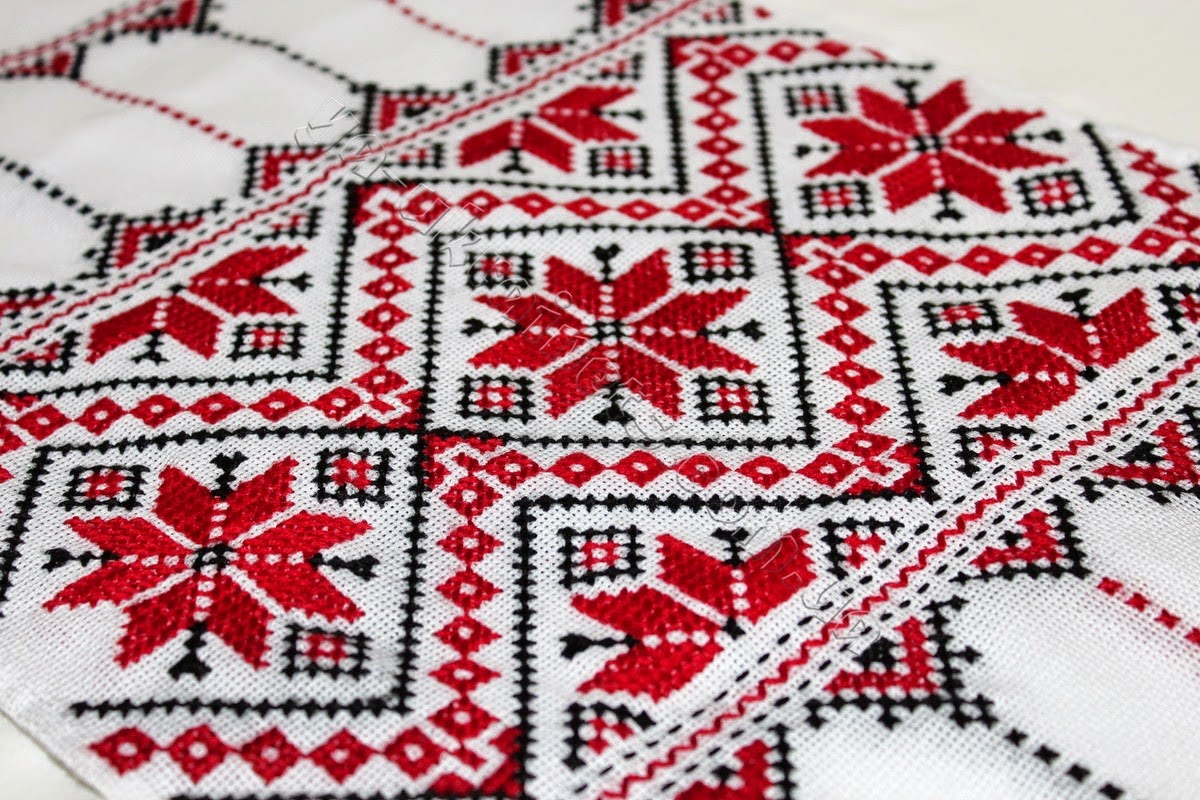 Modern scientists have made a thorough research of the embroidery code. After collecting ornaments and reviewing thousands of embroidery varieties, they have found out that ancient embroidery patterns represent information about who created the embroidery, when it happened, and what words were encoded.

The book that rediscovered the world of embroidery

In 2008, the world saw the the first-of-its-kind book about the letter decoding of embroidered symbols on clothing and household items. Volodymyr Pidhirniak, the book’s author, called the book “Text embroidery. Brodivske lettering.” (published in Ukrainian).

Volodymyr is a well-known researcher of Ukrainian embroidery. In his book he pays special attention to the history and culture of the Carpathians, and describes meaningful ornament patterns. 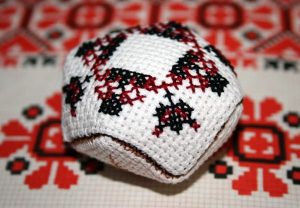 Thus, for ancient Ukrainians, embroidery had not only aesthetic and decorative meaning but also symbolic and truly sacred character. Circles, crosses, rhombuses, and spirals are unique symbols which are equated with celestial bodies, flora and fauna, family, humanity, etc.

Thanks to these very patterns Volodymyr Pidhirniak decoded the mysterious codes and shared the following information:

- Ukrainian letters and numbers in embroidery;

- days of the week, names of months and constellations;

- instructions on how to create your own ornaments.

Encryption looks like a modern QR code: each symbol hides a letter and a number that together create a unique charm pattern. Thereby, anyone can use such an embroidered alphabet and convey a message via ornaments. And all who learn how to use such an alphabet, will gain a new level of knowledge of the Ukrainian language.

Ukrainian embroidery with a mystery

The author describes Brodivske lettering on the example of a traditional neckpiece. It is believed that other embroidered items (shirts, towels, and pillows) have their own special pattern compositions. The Ukrainian neckpiece is embroidered from the center to the edges. The requirements for text ornaments are standard: 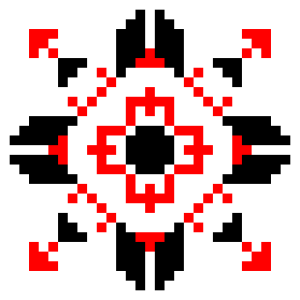 - the use of laconic phrases and sentences;

- each word represents a flower which has the first letter in the center and 4 petals (axes) that come from the center and kinda “strung” the letters in the word;

- the letters of one level are placed on the radial axis, to the right of it and between the other axes in a symmetrical order;

- the author is free to choose the orientation of the letters (they can be depicted directly, in an inverted manner, upside down, etc.);

- the author's name is located in the corner of a neckpiece or other item of clothing;

- the dates are indicated in the following order: the year, phase of the moon and state of the peculiar planet, then the time of year, current month, day of the week and date;

- different shades of embroidery are used to make some accents in the ornaments; red and black are the most common colors in the Ukrainian embroidery art.

Important fact: 4 axes are used traditionally but their number can be changed to three, eight and other.

Examples of how letters and numbers are depicted

This is how the Ukrainian alphabet looks in the encrypted version. In the first column we see diagonal writing, in the second one - horizontally-vertical, and in the middle one - Ukrainian letters (in Cyrillic). 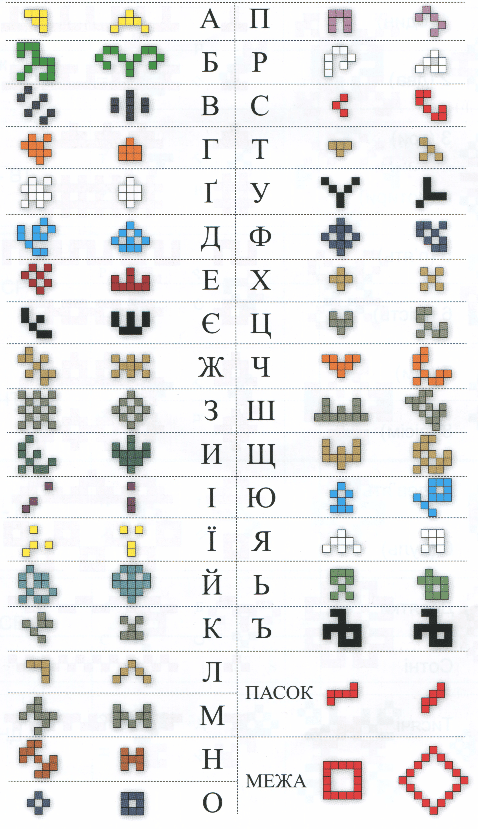 The numbers in the embroidered alphabet look like this. You see symbols of a specific number and a finished pattern. 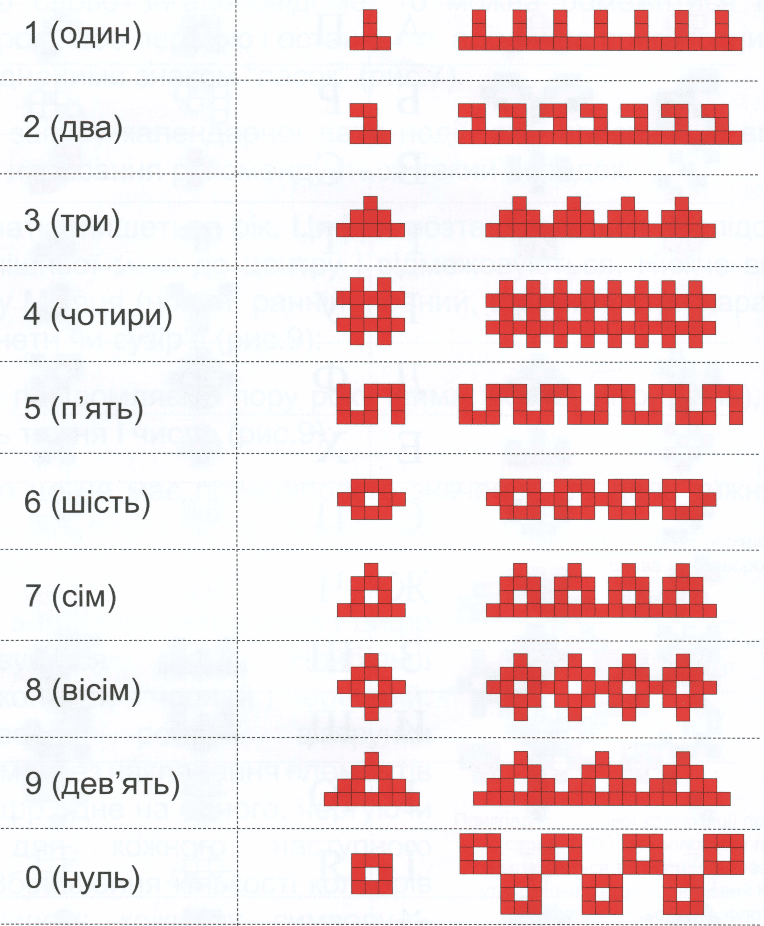 Look how the names of weekdays are depicted. The first column has the name of the weekday in Ukrainian (Monday to Sunday); the second column has two variants of the symbol, and the third column includes the finished pattern. 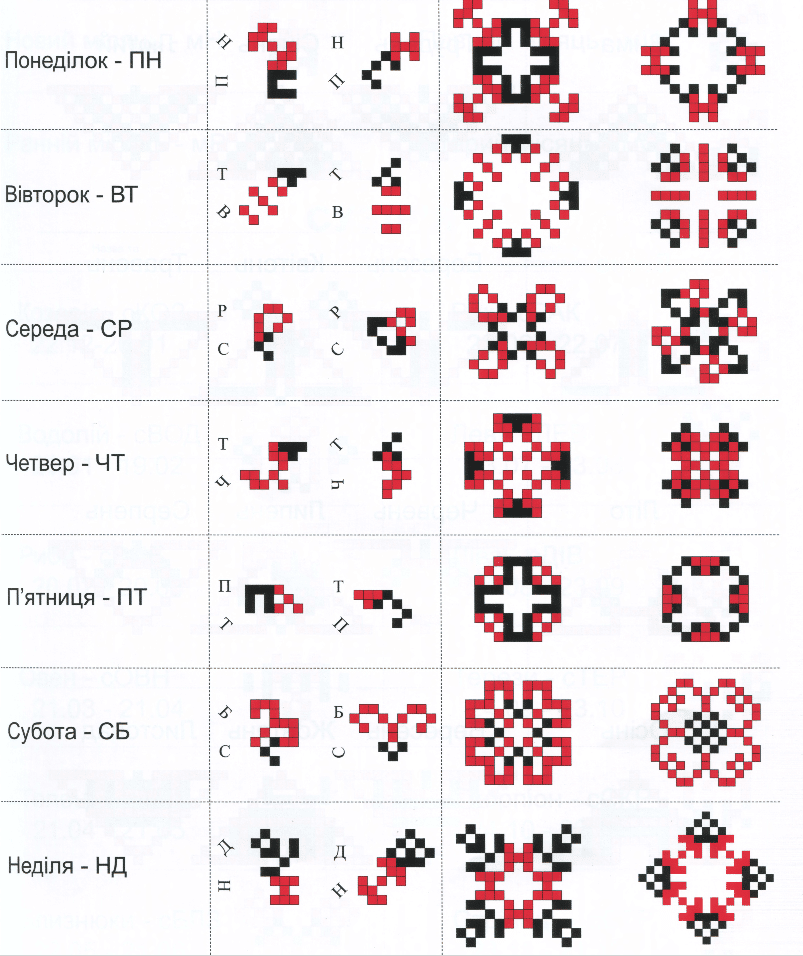 Here's what the seasons and the names of the months look like: 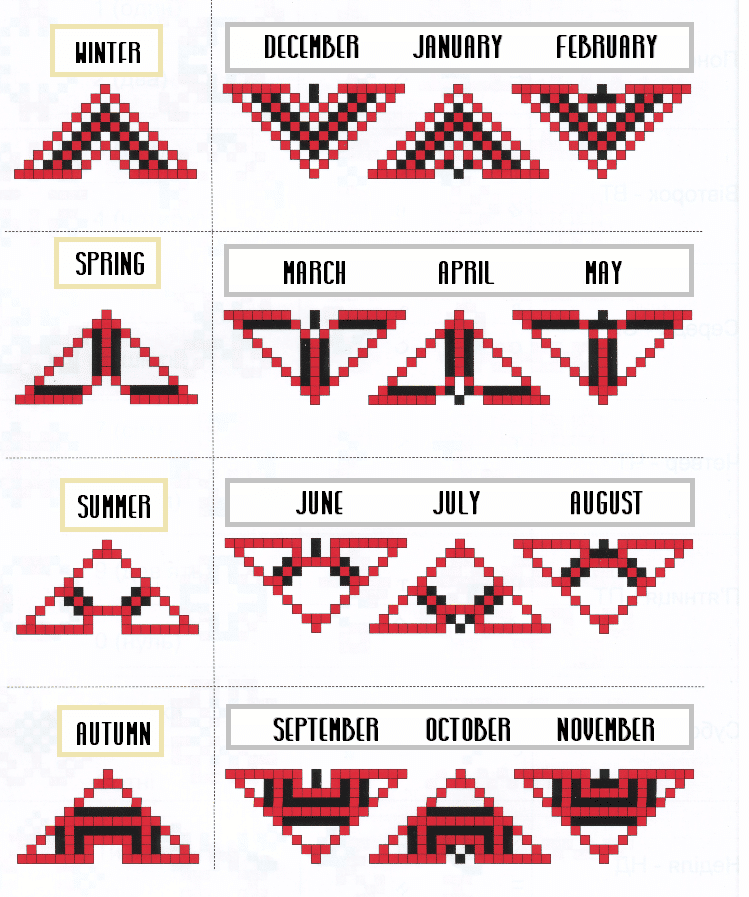 How to “write” words using an embroidered alphabet

Let’s take a simple word "mother." First you need to write it down in Ukrainian, then compose (as it is indicated in the image below) and summarize it. Look:

Repeat the same with the word "father":

Would you like to encrypt your message using embroidery ornaments? It would be an aesthetic mix of something beautiful and meaningful!

#1. How to correctly embroider the Ukrainian neckpiece?