The traditions of Ukrainian wedding have formed for centuries. In the course of time, some of them have changed as people, their preferences, and lifestyle change with time. Yet main customs of celebrations have gone through years and even centuries and remained the same. For instance, big rich weddings are still held in many regions.

Until quite recently, the celebration of the wedding lasted almost the whole week:

Friday – the beginning of the wedding 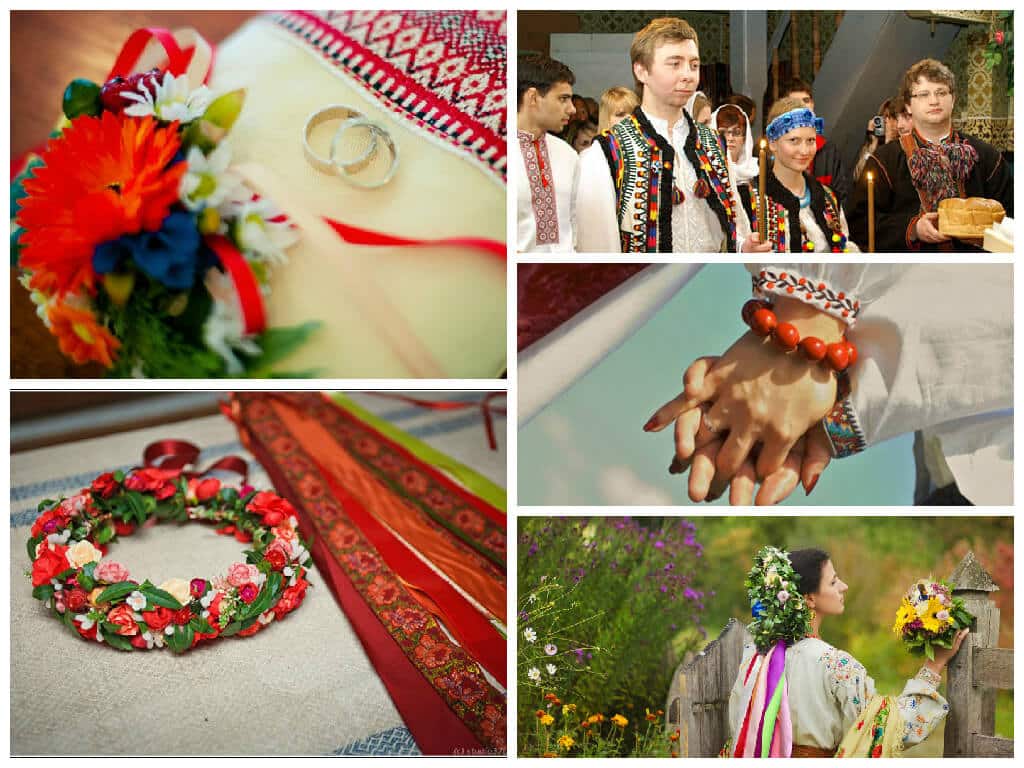 Modern traditions of marriage proposal mostly represent an agreement between the young couple and their parents on the date and place of the wedding. When co-parents-in-law come to an understanding, future mother-in-law puts a kerchief on bride’s head which means she is accepted by groom’s family. Fiancée, in her turn, presents bread put on embroidered towels to co-parents-in-law.

Traditionally, fiancée buys a shirt for her future husband so that he can wear it on a wedding day. Best men should repurchase it from maids of honor. In a day and sometimes on the wedding day itself, bridesmaids take the shirt and come to fiance’s house. Bridesmaids can bring a couple of shirts and, depending on the amount of money best men propose, they give a certain shirt. If a sum is not very big – the may give an old shirt, if the sum is bigger – the can give a newer one, and when they see eye to eye - best men can take the true wedding shirt.

The embroidered towel is a symbol of unity and joy of family life. A bride should embroider this towel during long evenings before her wedding. 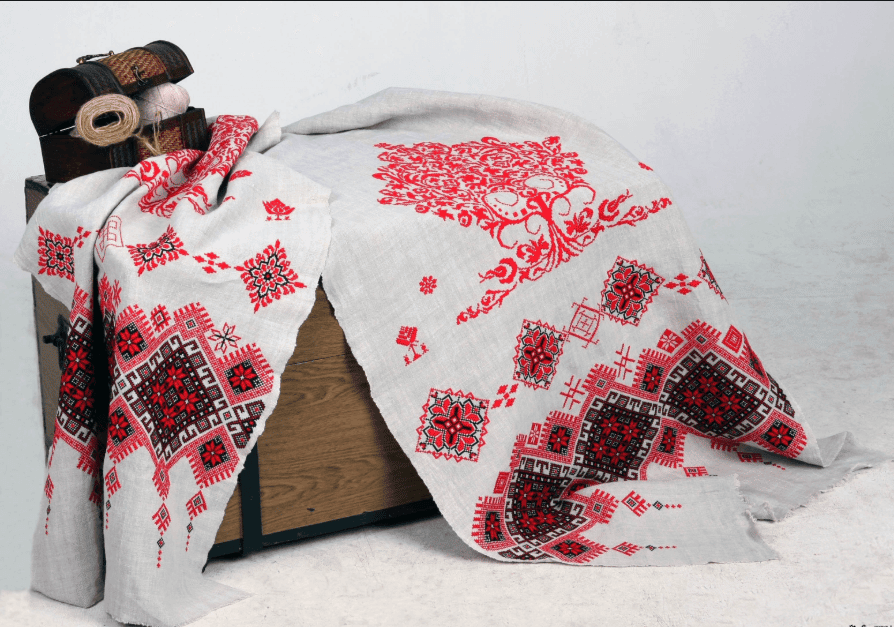 One more attribute of Ukrainian wedding is karavai (round loaf bread), which is baked by a woman who is happy in her first marriage. If baked karavai looks good, newlyweds were predicted to have a happy married life.

It’s hardly possible to imagine Ukrainian wedding without the “bride purchasing”. This tradition comes from the earliest times. A groom could “purchase” a bride from her father for money, cattle, or for some peculiar household items. Nowadays bride is “purchased” for horilka (vodka), fiancé sometimes puts money under the bottles.

The blessing is a very old tradition which denotes the approval of parents for the marriage of their children. Earlier, the church wedding was not permitted without parents’ blessing. In different regions, young couples ask for a blessing in a variety of ways. Often parents sit, a newly married couple comes to them, bows, and kisses hands. Sometimes parents stand while newlyweds bow before each of parent. 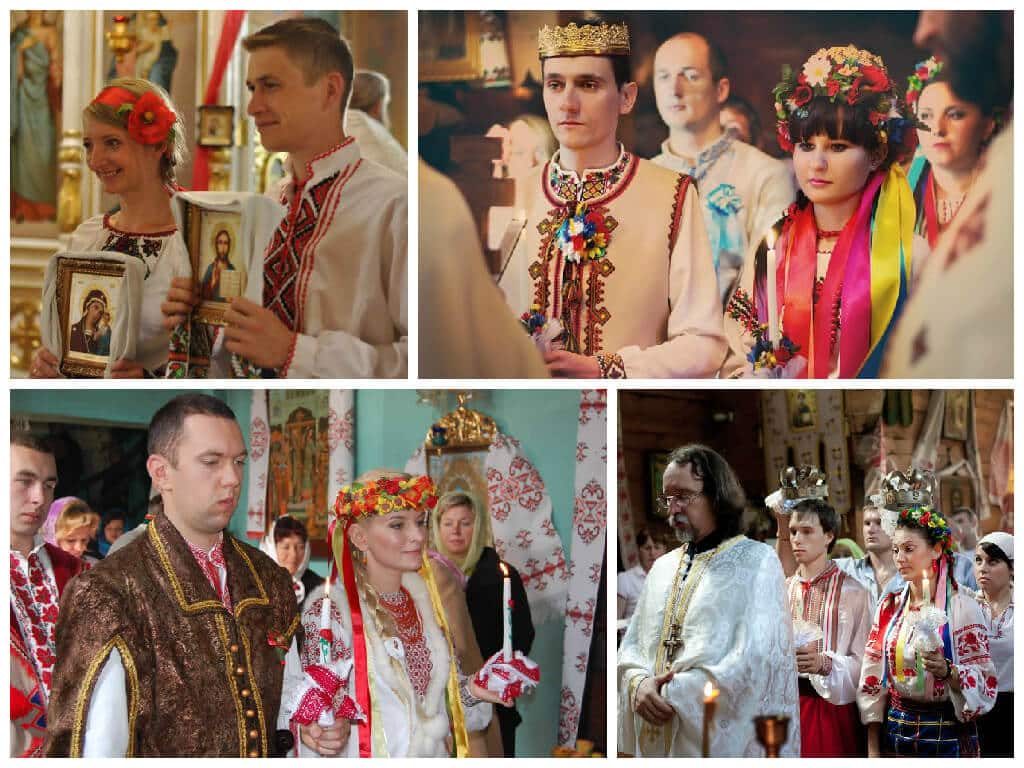 First wedding rings appeared on the East where they were adopted by ancient Greeks, Romans, and later by rest of the world. A wedding ring meant that a woman was not sold, because now she “belongs” to her husband. In 800, the Bishop of Rome, Nicholas 1, announced the use of wedding rings by Christians and since that time rings became the symbol of “fidelity, consistency, and integrity of love.”

Candles which burn in the hands of newlyweds symbolize the spiritual festivity and light. Light is the symbol of God’s holiness and grace, his blessing for the beginning of a new life for a married couple.

During church wedding, a priest ties fiancé’s right hand with fiancée’s right hands and puts his hand above. This means that through a priest’s hand a man gets a wife from the church, which unites them forever. According to folk traditions, sometimes the hands of newlyweds are tied with a big kerchief or towel – this symbolizes a hope for more unity and strength of family ties.

Since the IV century, wedding wreaths which were put on the heads of newlyweds came into use. At first, wreaths represented crowns made of flowers, myrtle or olive twigs and leaves. Later wreaths were made from wood and/or metal, and shaped in the form of a king’s crown. They symbolized the win over passion and reminded of human dignity of the first wedded couple – Adam and Eva. There was a time when church wedding wreaths were worn during seven days after church wedding and taken off by a priest during devotion. 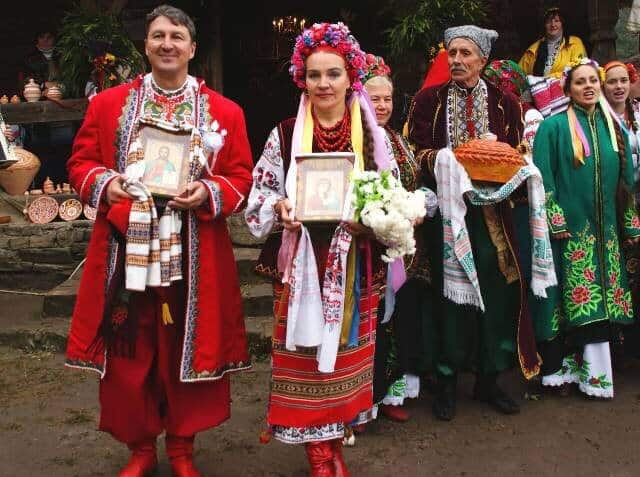 After the church ceremony, the wedding celebration continues in the house of newlyweds (mostly in villages) or in restaurants. The parents of newlyweds meet them in front of the entry, again bless a young couple for a happy life with karavai (round loaf bread) and images of a saint in their hands. In some regions parents are waiting behind closed doors and fiancé should knock, then parents come out and bless their children. The mother of fiancée wears a sheepskin coat. After the blessing, she puts a coat on a floor (sheepskin upside), putting underneath wheat and money to enable her daughter to live in abundance.

Sometimes fiancé goes into the house by carrying fiancée in his hands – this tradition has come since olden times. In such a way a bridegroom tries to fool devils so that they don’t steal his young wife.

The tradition of washing of mother-in-law’s legs by a son-in-law still exists in many regions. Often, best men make mother-in-law sit on a wheelbarrow and go together to a groom. He washes her legs with wine, champagne, and water; then kisses legs and puts new shoes on her legs.

Korovai is often cut before a festive table and given to all guests. Sometimes the round loaf bread is cut at the end of the wedding, and sometimes people celebrate “Korovai feast” the whole week after the wedding. 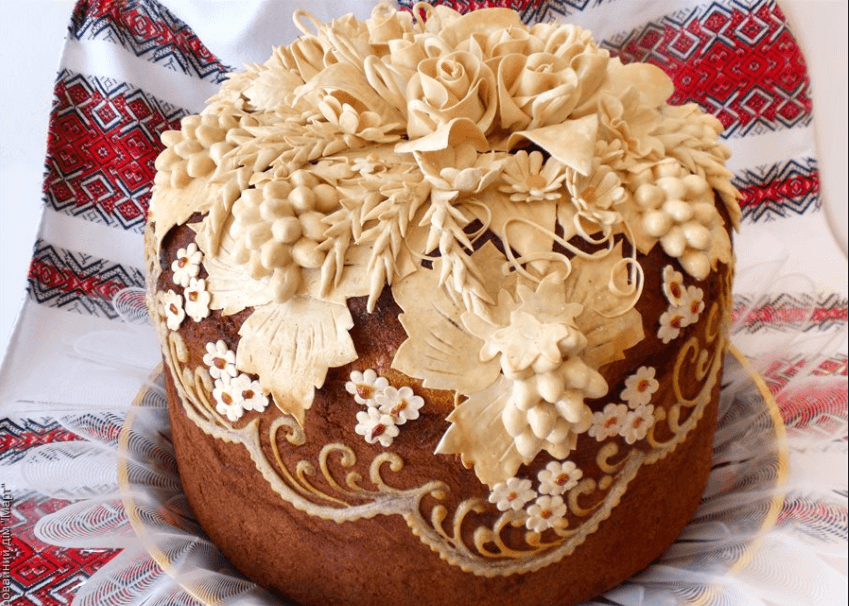 At the end of the wedding, fiancée’s wreath and bridal veil are taken off. She wears a headrail. This custom symbolizes the final farewell with girlhood. Then bride says goodbye to her mother and house. Parents take away fiancee’s dowry – chest and pillows and go to the house of the groom.

If the wedding is celebrated for two days, then in the house where newlyweds were sleeping, the next morning best men “collect dowry” by catching chicken, geese, and try to steal a broom (in order to make all girls run after them). Then the dowry is taken to the house where the wedding will be celebrated and given to hosts. The bride takes a black chicken and throws it in mother-in-law’s kitchen – in order to become a fully fledged mistress in a new house.

As you, there are many interesting wedding traditions in Ukraine and those which we talked about today are by no means all. In next articles, we’ll continue to discover rich Ukrainian customs of the wedding celebration. 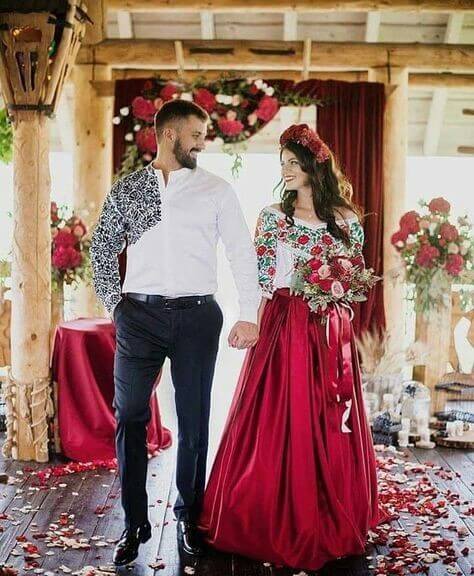 Have you liked the article about wedding traditions in Ukraine?