Why should you celebrate Christmas with your family? 12 lean Ukrainian dishes for Christmas Eve and 10 interesting old Christmas traditions 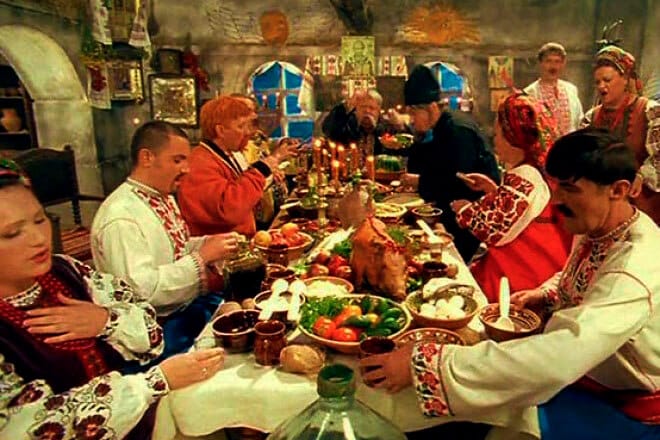 On the night of January 6 to 7, Ukrainians celebrate one of the biggest religious holiday - Christmas. The evening on the eve of this holiday is called Christmas Eve and has many interesting traditions.

Long ago, this day, from the very morning, the woman of the house sets to work. First of all, she performs a magical action and gets "new fire." To do this, she takes the flint and steel, which have lied under the images of Saints during the last twelve days, then crosses herself three times and strikes the "new fire", facing the sunrise. During the last twelve days of the last month, the homemaker has also dried twelve logs, which now should serve as kindling for "a new fire". 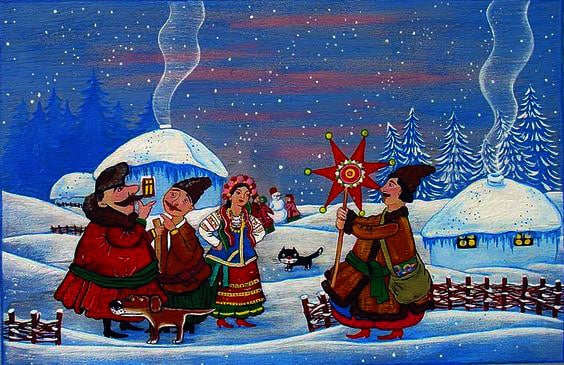 1. This evening the whole family should undoubtedly spend together to remember about the strength of family ties throughout the year. Old people say that a person who spends the Christmas Eve outside the family circle will feel uncomfortable and lonely, wandering around the world all next year.

2. On this day, it's important to forgive all offenders, in order not to take offenses and bad mood in the next year.

3. It is also accepted to miss breakfast and dinner on this day. Only children can eat something at lunchtime to maintain the normal functioning of the digestive system.

4. When it starts to get dark, the owner of the house makes the symbol of the harvest called "didukh" (Ukrainian Christmas decoration made of rye, wheat or oatmeal sheaf). Passing through the threshold of his home, the master of the house welcomes his mistress as if they see each other the first time this day. He greets with Christmas, wishing hundred years of happiness and health to all present at home. Then the master of the house puts "didukh" under the images of Saints, and the mistress covers the table with a new white cloth.

5.  A child under the age of seven years puts three loaves of bread, a pinch of salt, and a wax candle on the hay that lies at the end of the table. Then the mistress puts a dinner on the table, and places kutia (sweet grain pudding) and uvar (dried fruit drink) on the couch. At the end of the day, children are already very hungry, but they know that it is too early to ask for food, at it is necessary to wait until the evening star appears in the sky – this is the sign that the Son of God was born. Then the the master of the house enters the room and solemnly announces that the Christmas has begun.

6. On the Christmas Eve, the family members do not forget about their ancestors and their dead relatives and invite them to take part in the dinner. Before sitting at the table, you need to blow on a chair to "not sit above the dead soul," who, probably, has accepted the invitation to this festive dinner. After the dinner, you can leave uzvar on the window for the dead souls of relatives.

7. The Christmas Eve is on the last day of the Christmas fast, so women cook 12 lean dishes, in honor of the 12 disciples of Christ. 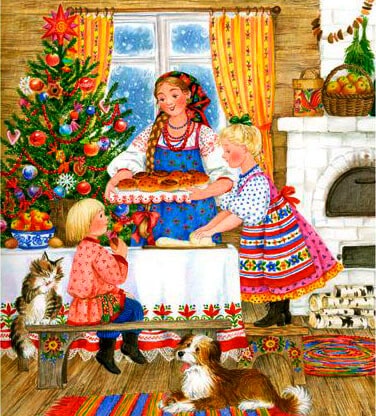 8. Traditionally, the first dish that is eaten is kutia. Then you can try other dishes and drink uzvar.

9. If it happened that you have a foreigner as a guest, he or she is */for sure invited to the festive table. The guests on the Christmas Eve bring happiness to the home.

10. One more important tradition of this evening is when children bring kutia to close relatives, godparents, and just outsiders whom they want to congratulate on the holiday. They sing Christmas carols, wishing well-being and prosperity. People, in turn, endow children with sweets and coins, which, according to the belief, bring good luck during the whole next year. 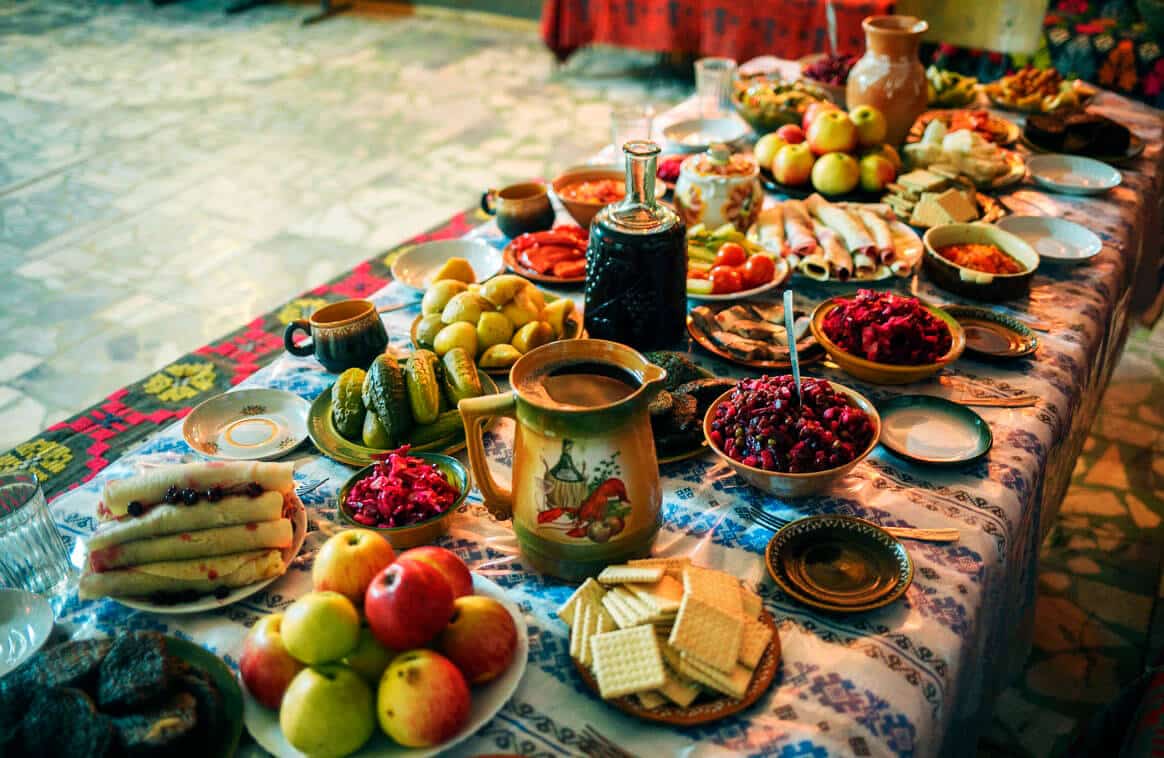 Kutia is a sweet grain pudding cooked using wheat berries boiled with honey and poppy seeds and symbolizing an act of sacrifice to God because wheat with honey is a sacred part of the Holy Supper. Poppy is a symbol of martyrdom, innocently spilled blood. Honey is a symbol of purity, God's word.

Enjoy the recipe for kutia with raisins, poppy seeds, and nuts

Pea is a symbol of God's spring, which is always reborn in a man after a decline.

Kapusniak is a sour cabbage soup. Cabbage acts as a symbol of simplicity and, at the same time, strength and unity around one solid foundation.

Enjoy the recipe for a sour cabbage soup with carrot, potato, and millet.

Borsch is a symbol of the celebration of goodness. As the homemaker cooks a lean borsch from various simple plants that the land gives her, the same a Christian strengthens his will in simple everyday small, healthy practices that he has gained from a family home or a good Christian society. The Christmas soup is boiled together with the precooked beetroot kvas. That is why it has a dark red color. This soup also symbolizes the blood of the children of Bethlehem, killed by Herod.

The very name of this dish indicates its symbolism. Pigeon is a symbol of God's love, a symbol of the Holy Spirit, a symbol of beauty and power derived from the Creator.

Enjoy the recipe for cabbage rolls with mushrooms under tomato sauce

Fish - In early Christianity, the fish was adopted as a symbol of Christ by many Fathers of the Church. The sign of the fish was the first monogram of Christ. Greek abbreviation Ichtios (the name of Jesus) is read as "fish." Believers, the disciples of Christ, and he Himself were likened to fish that are safe only in the water of doctrine. Three interlaced fish or three fish with one head symbolize the Trinity.

Enjoy the recipe for marinated herring with carrot and onion

Dumplings symbolize prosperity. God has appointed the place of a man in the kingdom of God where a man feels good "as a varenyk in oil". 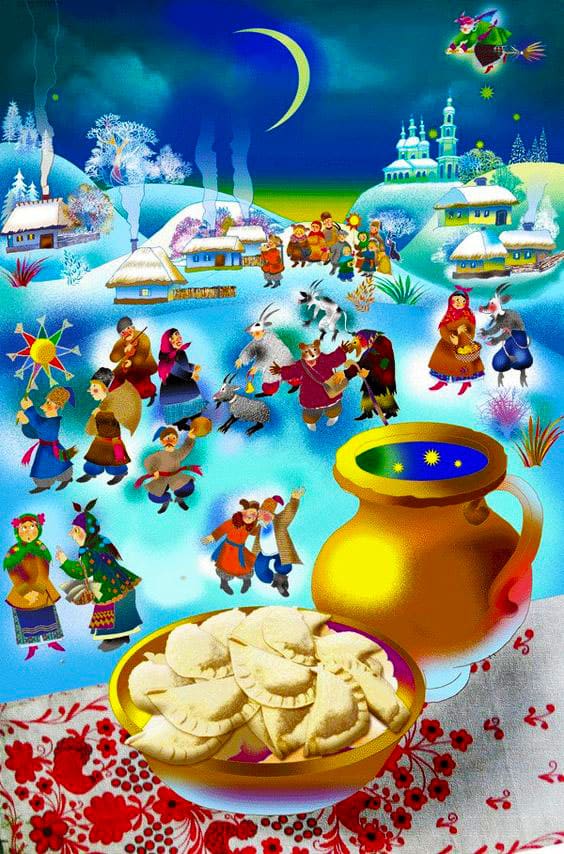 Enjoy the recipe for classic yet absolutely yummy varenyky with potato

A pancake is a peculiar symbol of the sun. Jesus Christ became the New Sun for Christians.

Porridge symbolizes the procreation, God's people who consolidate around the newborn Jesus. The porridge is a symbol of the general union of people thanks to the consecration of the human race that came to us through the incarnation of the Son of God.

Hand pies are a symbol of health and happiness in which a person can get in constant communication with the newborn Jesus.

Enjoy the recipe for hand pies with buckwheat and eggs.

Uzvar represents the life given to each person. Holy water is a symbol of the purification of the body and soul.

Enjoy the recipe for uzvar with dried apples and pears.

Pampushky symbolize saints in heaven who believed in Jesus and received eternal life. There are millions of them and every person, especially a Christian, is called to a sweet, full-fledged, eternal life. The word "feast" comes from the "holy", and hence the pampushka is a symbol of the holiday and joy bestowed by God people.

Enjoy the recipe for flavorful pampushky with garlic.

Have you liked the article about Ukrainian Christmas Eve Dinner – Recipes and Customs?