Traditional Ukrainian food. Have you ever wondered where varenyky (dumplings) came from? Ukraine is the homeland for salo with garlic, borsch (beetroot soup) with pampushky, and varenyky (dumplings) with cherries and sour cream. These tasty and nourishing Ukrainian dishes have expanded far beyond its native land.

Today we’re going to discuss the history of varenyky/dumplings/perogies – whatever you might call them.

Varenyky (dumplings) are traditional Ukrainian food, the icon of Ukrainian cuisine. Perhaps, there is no other such dish in Ukraine, which is used so heavily and loved so dearly. But there was a time when nobody in Ukraine even heard about varenyky. So, how it all started?

A few people know that this dish has Turkish roots. Little stuffed patties cooked from unfermented dough caught the fancy of Ukrainians. Such a dish as “diushvara” is still present in Azerbaijani cuisine. Outwardly, it resembles little varenyky or pelmeni. In those times when the Turks brought in Ukraine “diushvara”, at first Ukrainians renamed the dish into “varanyky” and replaced the meat filling with more common ones, like salo, potato, crackling, and sour cherries, and the food has become to be called “varenyky.” 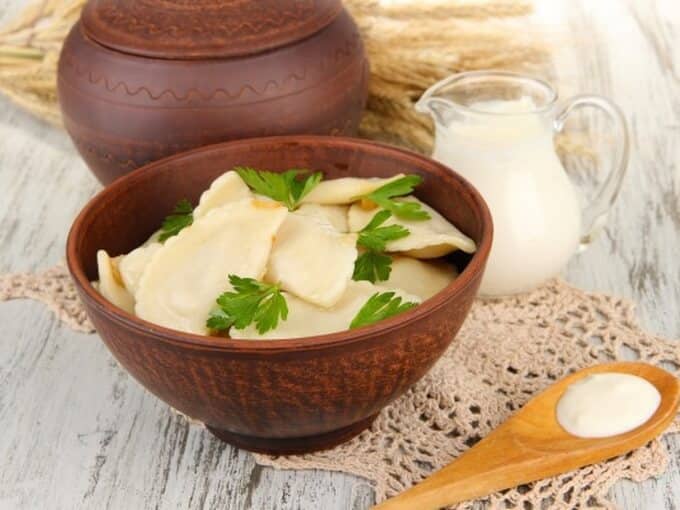 The floury filling was peculiar to Poltava and Chernihiv region. To cook this filling, salo was fried until it transformed into cracklings and then flour was added gradually and cooked until it soaked all the lard. Then this mixture was cooled and used to stuff varenyky. Cracklings were far from a dietetic dish, but they added a special flavor and taste to any dish.

In some parts of the Western Ukraine varenyky were called pierogies (“pyrohy” or “boiled pyrohy”). They were cooked in fiercely boiling water and then transferred to a “makitra” (an earthenware pot) with the help of a ladle made of osier. The dumplings were poured with the mix of salo, onion, and oil. If varenyky were made with cottage cheese, fruits or berries, then sour cream or riazhenka (fermented baked milk) were poured above. Fresh or sour milk could also be used.

The dough was cooked using wheat, rye, and buckwheat flour or their mix. The unfermented dough was kneaded using whey with an egg and then left to ripen. The cooked dough was rolled in a 1-1,5 mm layer. For varenyky with a juicy berry filling, the dough should be twice thicker. You can cut it in the form of squares and then shape them into triangles or you can cut the dough into (5-6 cm) circles and shape varenyky in the form of half-moons. You should put about 1 tsp of the filling above the piece of the dough in other case you won’t be able to properly seal your varenyky. You can grease the joints (seals) with the white of an egg.

Then varenyky were deepen into a big pan with boiling salted water. It is better to use a big pan, since in a little one dumplings can stick to each other. The boiling time varies depending on the filling. When varenyky come to the surface, they are cooked. The dumplings were transferred to a deep bowl and poured with melted dairy butter. Served with sour cream. 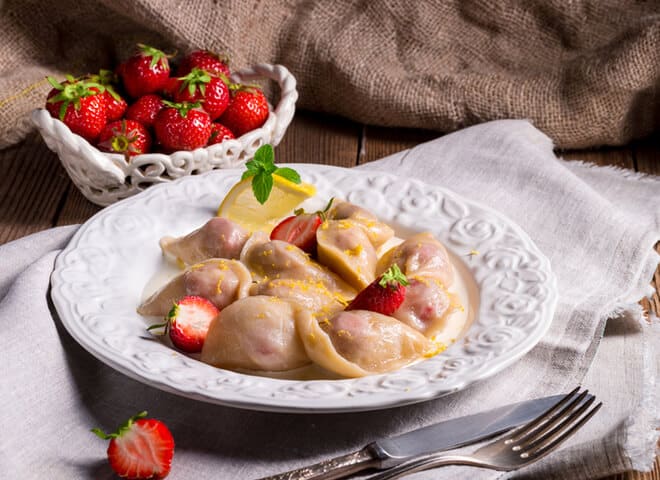 Varenyky were not common in the everyday menu of Ukrainian peasants. They were present on a Sunday or festive table. Dumplings were also served on weddings, name days, funerals, religious feasts, etc. Varenyky were the obligatory dish which bridesmaids presented a fiancée on a second wedding day. There also was a tradition when Ukrainian women presented varenyky to a birthing mother. In this case dumplings symbolized reproduction. Vareynyky with cottage cheese served with sour cream were a must on “Masliana” (Pancake Week) together with flapjacks and fluffy pancakes.

Nowadays varenyky still remain to be one of the most popular dishes among Ukrainians and abroad. Cooked according to a wide range of Ukrainian recipes, they are present in the main menu of many modern restaurants to treat foreign tourists and native Ukrainians. 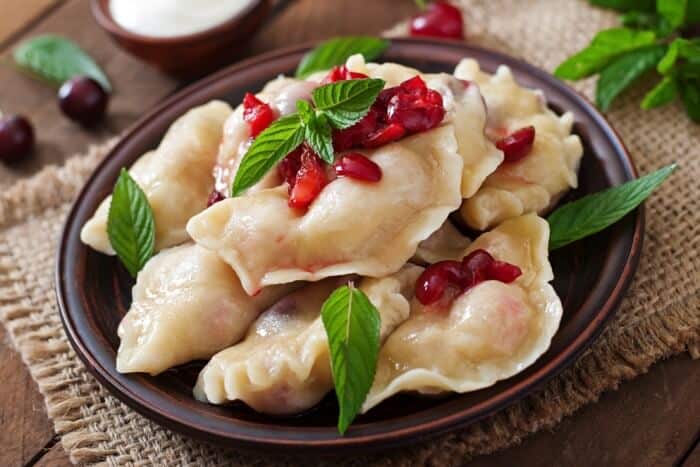 Have you liked the article about Ukrainian varenyky? 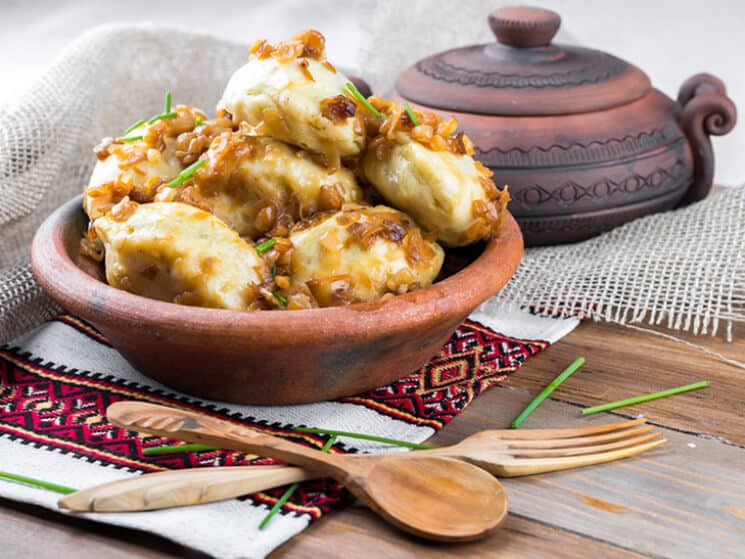